Resilience and Efficiency in Transportation Networks 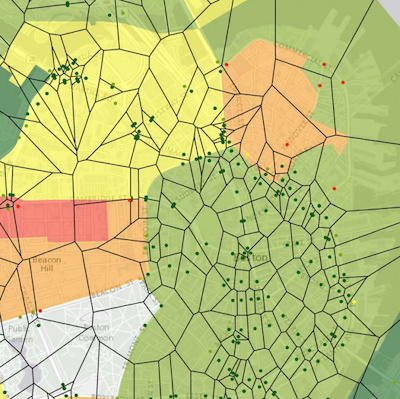 Urban  transportation systems are vulnerable to congestion, accidents, weather,  special events, and other costly delays. Whereas typical policy responses  prioritize reduction of delays under normal conditions to improve the  efficiency of urban road systems, analytic support for investments that  improve resilience (defined as system recovery from additional disruptions)  is still scarce. In this effort, we represent paved roads as a transportation  network by mapping intersections to nodes and road segments between the  intersections to links. We built road networks for 40 of the urban areas  defined by the U.S. Census Bureau. We developed and calibrated a model to  evaluate traffic delays using link loads. The loads may be regarded as  traffic-based centrality measures, estimating the number of individuals using  corresponding road segments. Efficiency was estimated as the average annual  delay per peak-period auto commuter, and modeled results were found to be  close to observed data, with the notable exception of New York City.  Resilience was estimated as the change in efficiency resulting from roadway  disruptions and was found to vary between cities, with increased delays due  to a 5% random loss of road linkages ranging from 9.5% in Los Angeles to  56.0% in San Francisco. The results demonstrate that many urban road systems  that operate inefficiently under normal conditions are nevertheless resilient  to disruption, whereas some more efficient cities are more fragile. The  implication is that resilience, not just efficiency, should be considered  explicitly in roadway project selection and justify investment opportunities  related to disaster and other disruptions.