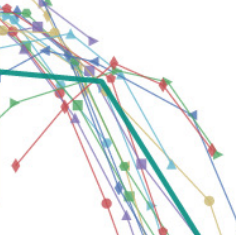 The dynamic of social networks is driven by the interplay between diverse mechanisms that still challenge our theoretical and modelling efforts. Amongst them, two are known to play a central role in shaping the networks evolution, namely the heterogeneous propensity of individuals to i) be socially active and ii) establish a new social relationships with their alters. Here, we empirically characterise these two mechanisms in seven real networks describing temporal human interactions in three different settings: scientific collaborations, Twitter mentions, and mobile phone calls. We find that the individualsâ€™ social activity and their strategy in choosing ties where to allocate their social interactions can be quantitatively described and encoded in a simple stochastic network modelling framework. The Master Equation of the model can be solved in the asymptotic limit. The analytical solutions provide an explicit description of both the system dynamic and the dynamical scaling laws characterising crucial aspects about the evolution of the networks. The analytical predictions match with accuracy the empirical observations, thus validating the theoretical approach. Our results provide a rigorous dynamical system framework that can be extended to include other processes shaping social dynamics and to generate data driven predictions for the asymptotic behaviour of social networks.