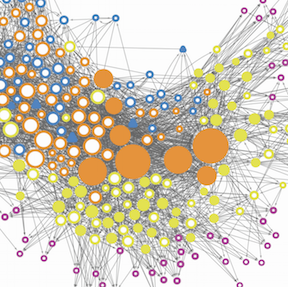 Recent studies on  the controllability of complex systems offer a powerful mathematical  framework to systematically explore the structure function relationship in  biological, social, and technological networks1,2,3. Despite theoretical  advances, we lack direct experimental proof of the validity of these widely  used control principles. Here we fill this gap by applying a control  framework to the connectome of the nematode Caenorhabditis elegans4,5,6,  allowing us to predict the involvement of each C. elegans neuron in locomotor  behaviours. We predict that control of the muscles or motor neurons requires  12 neuronal classes, which include neuronal groups previously implicated in  locomotion by laser ablation7,8,9,10,11,12,13, as well as one previously uncharacterized  neuron, PDB. We validate this prediction experimentally, finding that the  ablation of PDB leads to a significant loss of dorsoventral polarity in large  body bends. Importantly, control principles also allow us to investigate the  involvement of individual neurons within each neuronal class. For example, we  predict that, within the class of DD motor neurons, only three (DD04, DD05,  or DD06) should affect locomotion when ablated individually. This prediction  is also confirmed; single cell ablations of DD04 or DD05 specifically affect  posterior body movements, whereas ablations of DD02 or DD03 do not. Our  predictions are robust to deletions of weak connections, missing connections,  and rewired connections in the current connectome, indicating the potential  applicability of this analytical framework to larger and less  well-characterized connectomes.