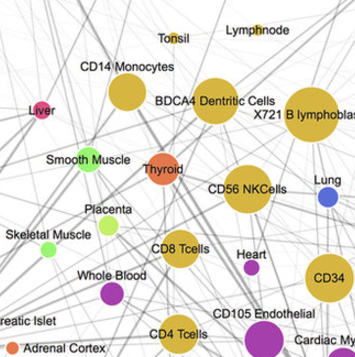 Genes carrying  mutations associated with genetic diseases are present in all human cells;  yet, clinical manifestations of genetic diseases are usually highly  tissue-specific. Although some disease genes are expressed only in selected  tissues, the expression patterns of disease genes alone cannot explain the  observed tissue specificity of human diseases. Here we hypothesize that for a  disease to manifest itself in a particular tissue, a whole functional  subnetwork of genes (disease module) needs to be expressed in that tissue.  Driven by this hypothesis, we conducted a systematic study of the expression  patterns of disease genes within the human interactome. We find that genes  expressed in a specific tissue tend to be localized in the same neighborhood  of the interactome. By contrast, genes expressed in different tissues are  segregated in distinct network neighborhoods. Most important, we show that it  is the integrity and the completeness of the expression of the disease module  that determines disease manifestation in selected tissues. This approach  allows us to construct a disease-tissue network that confirms known and  predicts unexpected disease-tissue associations.